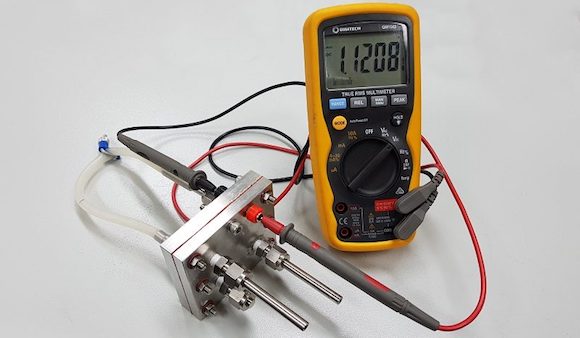 “Will anything match lithium-ion batteries for energy density?” is a frequently repeated question. It’s certainly not in the cards in the next few years. But the research coming out of Australia’s RIMT University in Melbourne says that one day, it’s possible – with a carbon proton battery.

The research team have designed and built a battery that uses environmentally friendly carbon electrodes, water, and a permeable membrane to store electrical energy.

“Our latest advance is a crucial step towards cheap, sustainable proton batteries that can help meet our future energy needs without further damaging our already fragile environment. As the world moves towards inherently variable renewable energy to reduce greenhouse emissions and tackle climate change, requirements for electrical energy storage will be gargantuan.

“The proton battery is one among many potential contributors towards meeting this enormous demand for energy storage. Powering batteries with protons has the potential to be more economical than using lithium ions, which are made from scarce resources. Carbon, which is the primary resource used in our proton battery, is abundant and cheap compared to both metal hydrogen storage alloys and the lithium needed for rechargeable lithium ion batteries.”

“Future work will now focus on further improving performance and energy density through use of atomically-thin layered carbon based materials such as graphene, with the target of a proton battery that is truly competitive with lithium ion batteries firmly in sight,” Andrews says.

According to the report in Science Daily, “The latest version combines a carbon electrode for solid-state storage of hydrogen with a reversible fuel cell to provide an integrated rechargeable unit.”

“During charging, protons produced by water splitting in a reversible fuel cell are conducted through the cell membrane and directly bond with the storage material with the aid of electrons supplied by the applied voltage, without forming hydrogen gas. In electricity supply mode, this process is reversed. Hydrogen atoms are released from the storage [medium] and lose an electron to become protons once again. These protons then pass back through the cell membrane where they combine with oxygen and electrons from the external circuit to re-form water.

“A major potential advantage of the proton battery is much higher energy efficiency than conventional hydrogen systems, making it comparable to lithium ion batteries. The losses associated with hydrogen gas evolution and splitting back into protons are eliminated.”

Proton batteries have been explored before at RMIT, with previous experiments resulting in a heavy and costly battery. The new carbon proton battery already can produce as much energy per unit of mass as lithium-ion units.