Renewably sourced energy is on the rise, and so is the opportunity to utilize it to its full potential. Wind, solar, and hydroelectric technologies are key renewable energy sources to help decarbonize the energy market. However, integrating these intermittent energy sources into the power grid is highly challenging due to the increasing need for grid flexibility and energy storage solutions. Hydrogen as a power storage medium is well suited to address these grid challenges and enables renewable power to be more easily utilized outside the electric grid like fuel for fuel cell vehicles, or even to supplement natural gas for heating. The key technology that underpins this energy storage process is the electrolyzer.

At its core, electrolyzers produce hydrogen that acts as an energy carrier. It is not only its storage potential but also the responsiveness of the electrolyzer systems that appeals to electrical grid operators. Electrolyzers are fast reacting devices capable of modulating their power consumption easily, making them very attractive for stabilizing power grids and delivering grid balancing or ancillary services. Within seconds the electrolyzer can respond to grid operator signals to capture surplus energy which may have otherwise been lost and stores it in hydrogen form. In this sense, electrolyzers help encourage further integration of more renewable power into the grid by ensuring that more renewable energy is used, and its value recouped, regardless of whether it’s in our outside of the grid.

Cummins has developed and installed more than 1500 hydrogen generation systems globally since 1948 and continues to make quick progress in innovating new products. Starting in 2013, Cummins supplied electrolyzers to the world’s first demonstration project that injected hydrogen into a natural gas grid in Falkenhagen, Germany using renewable wind energy to power the system. Cummins has since supplied electrolyzers systems for four additional European-based projects injecting hydrogen into natural gas grids. In November, Cummins announced with Enbridge that its Markham, Ontario, Canada-located power-to-gas facility received approval to inject hydrogen, making it the first demonstration project of its kind in North America. 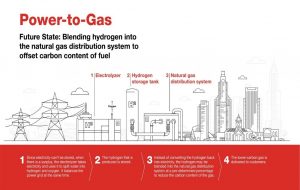 Power-to-Gas is just one example of how the stored renewable energy can be used. Hydrogen can also be used as fuel at refueling stations for fuel-cell electric vehicles such as buses, trucks, trains, and cars. To date, Cummins has already delivered electrolyzers for more than 50 hydrogen fueling stations across the globe. But most importantly, electrolyzers can produce renewable hydrogen for use in refineries to remove sulfur from fossil fuels, and directly as an industrial gas for steel, glass, semi-conductor and other sectors. This is where electrolyzers show its short-term potential. Almost all of the approximately 70 million tons of hydrogen produced today is considered “grey hydrogen,” because it is produced from natural gas in process called steam methane reforming where natural reacts with steam to generate hydrogen and CO2. In practice, this process emits approximately 10 tonnes of CO2 for each tonne of hydrogen produced.  Cummins expects the world’s initial attention will be given to replacing “grey hydrogen” with “green hydrogen” to reduce carbon emissions, if it was produced primarily with electrolyzers using renewable power.

Over time, both the price of renewable power and the price of electrolyzers will decline, leading to widely available green hydrogen at a lower cost. The increased availability of low-cost green hydrogen is projected to drive demand for hydrogen powered fuel cells to convert green hydrogen into low-carbon power for everything from trains to on-highway trucks and buses, to off-highway construction equipment and stationary power applications.

From grey to green – Cummins is moving today to seize the opportunity that await. With bold investments into a broad portfolio of technologies across battery electric and fuel cells to advanced diesel and natural gas, and hybrids in-between, Cummins aims to move the world towards a carbon neutral future.