Just last year, energy storage’s role on transmission networks was still being debated, considered, and proposed in a variety of sizes and uses. Just one year later, Fluence’s global team has helped advance the deployment of battery-based energy storage as “virtual transmission” assets, with a variety of markets considering such projects and multiple networks actively moving forward on projects totaling over 1 GW.

Virtual transmission is the utilization of specifically configured battery energy storage systems in place of transmission capacity to provide combinations of capacity, services, and capabilities that achieve greater value than traditional solutions. Virtual transmission projects can take the form of single assets, pairs of assets working in tandem (as “virtual transmission lines”) to mimic line flows at both ends, or as a portfolio of assets across the system, as with the trio of assets recently approved in Germany. The key is what applications networks need such a system to provide: 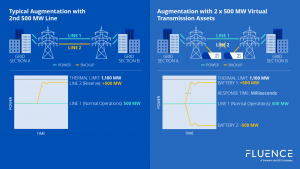 “Kaleidoscope” of Options Being Evaluated in Markets Globally

In the United States, energy storage is being evaluated in regulators in California, the mid-Atlantic region, the Midwest and the Southwest Power Pool as a transmission-only asset. The nation’s top federal regulator (FERC, federal energy regulatory commission) is actively involved in a regulatory proceeding on the same subject. Overall, clarifying the regulatory construct for transmission-only storage assets would allow transmission companies to own these assets wholly to provide network services, enabling them to defer and potentially avoid costly and time-consuming upgrades to lines.

In short, instead of waiting for others to go first, countries around the world are rushing to the starting line, getting their first virtual transmission projects in motion to address critical needs.

Australia is also moving quickly compared to the typical 5-10 year timelines for transmission infrastructure projects. Australia’s regulators are continuing to evaluate battery-based options for adding more capacity on the interconnectors between the states, which can be deployed in a more scalable fashion than traditional infrastructure.

The big change? Last year represented the first time battery-based assets were considered for as a non-network alternative to traditional infrastructure upgrades under the NEM’s Regulatory Investment Test-Transmission (RIT-T) process, as an option for upgrading the Queensland-New South Wales Interconnector.

This year, similar non-network upgrade options have been considered for inclusion in the 2020 Integrated System Plan, AEMO’s strategy roadmap looking out to 2040. These options would offer a way to add new capacity to the NEM’s interconnectors joining state grids in 1-2 years instead of 7-8, strengthening these key transmission corridors in phases, ensuring the right amount of capacity is added based on how Australia’s generation mix continues to change.

Fluence’s team has been advancing applications of grid-scale storage since we deployed the first lithium-ion based project in the U.S. in 2008. Compared to the earliest days of storage deployments, innovation today is happening at light speed across the grid.